On September 11th 2010 Bikita and I attended the DKK Mentaltest-program in a forest near Næstved. The test was arranged by the “Broholmersociety”, and we were allowed to join in, as the Ridgebackclub unfortunately did not arrange any mentaltests in the autumn. Instead we joined forces with a bunch of very huge, but very friendly Broholmere.
The test itself was conducted inside a forest – a fact which Bikita found most interesting. The forest was sure to be full of animal scents and –tracks, so I was a little nervous to let her loose in there, but thankfully she stuck by me. However, it was clear to me that she would rather go tracking in the forest and I was never really able to get her mind set on playing with me at the end of the test, as she had a more exciting agenda of her own. The testleader fired the first few times before I had succeeded in starting a game with Bikita and due to that she got a 2 in the last test “Sharp sound”. Both the grades 1 and 2 are considered “bulletproof” but I actually argued with the judge afterwards because the shots had been fired before an activity was initiated between Bikita and me, and as such it wasn’t correct to say that Bikita interrupted an activity due to the shots.
Anyway, in the very end of the test your dog is on a leash and several shots are fired at close hand and this time it was clear to anyone that Bikita was not affected by the shots, whatsoever.

Unfortunately you only get verbal and no written comments after the test – which by the way is not a test that you can fail or pass – but a mentaldescription where the test can be stopped during the test, if the testleader believe, that it would be bad for the dog to continue e.g. if the dog gets anxious and/or stressed.
But mostly these tests are only stopped if the dog is not “bulletproof” and for example leaves the testing area to get safe somewhere else.
The “Sharp sound”-test is the last test but the dog is also observed a few minutes after this test, to see if it’s been stressed up by all the different surprises it’s been exposed to.

Bikita passed the test excellent altogether. She showed that she is kind, takes a balanced contact, is fittingly brave when faced with the most spooky ghosts, she has a fitting activity level when left on her own with an inactive leader, she is extraordinary fast to shake of any frights, she is “bulletproof” and after the test she was not at all stressed, but calm and happy.
Her hunting abilities are not at all captured by this test. I believe that this is due to the “Broholmersociety” was unable to make the right setup; they simply had a plastic bag moving in a walking-pace down the forest path – nothing that captured Bikitas attention, and she isn’t shy of running down a leaf blowing in the wind.
But it is mainly live animals that make her tick. At home she can see the deer passing through the wood in the end of our garden and when that happens she is untiring: not seldom do we let her out 15 times a day and every time she runs as if fired by a cannon to hunt the deer – whom already cleverly learned that no harm can come to them as a tall fence separates them and Bikita. 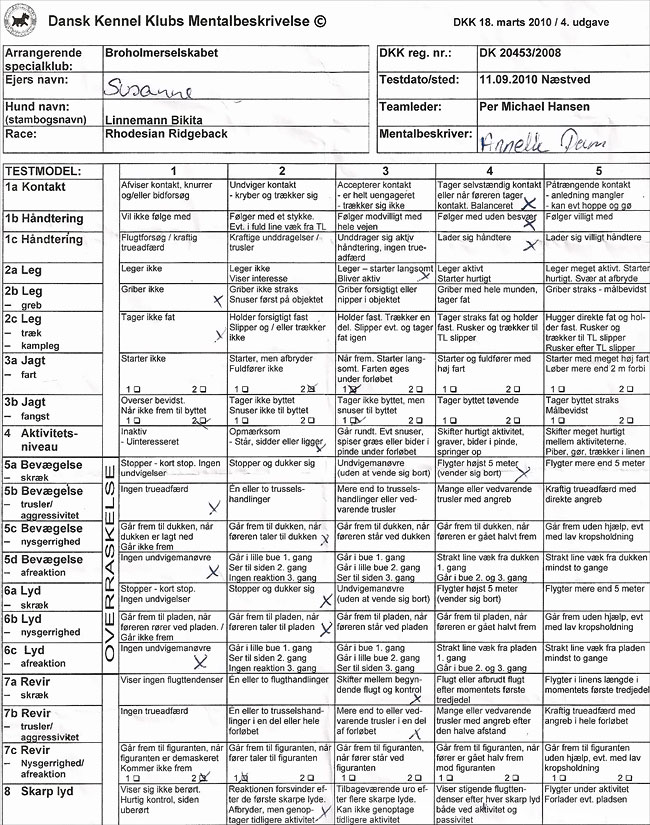