Our little kennel is quite new, in fact it was first the 22th January 2011, we got the letter from DKK (Dansk Kennel Klub) saying that our kennelname “Kennel Bikita’s Legacy” has been approved by DKK as well as by the FCI (Fédération Cynologique Internationale). Since then we have had a visit from one of the official “kennel-contacts” from DKK and has now got the approval of our place here. So now we are finally allowed to use the logo, which documents that Susanne, the owner of Kennel Bikita’s Legacy, has completed DKK’s breeder-education, as well as the compulsory dogkeeper-education.

We are a family of four, who live in the countryside on Sealand together with our Rhodesian Ridgeback Bikita, an old German Shepherd , cats, sheep and two Icelandic horses. 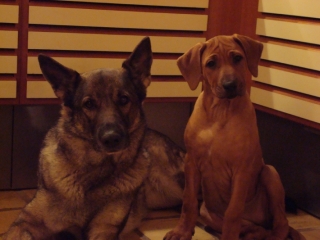 I, Susanne, have been a dog-owner since the very first time, I as a child persuaded my parents to get one. My first dog was a Golden Retriever, which was very cute and adorable, but also very insecure, afraid of various things from shooting and fireworks to simple darkness. I remember that I wanted a braver dog, and as a teenager, almost 40 years ago, I ran across the breed Rhodesian Ridgeback in a magazine, who back then, was an almost entirely new breed in Denmark. Through research I found out that the Rhodesian Ridgeback might just be the perfect breed for me. In 1983 I got my very first Ridgeback, a male, Troldeborgs Ukubo, followed by a lovely Ridgeback bitch, Torhusets Peacock Pfara, in 1986.

In 1989 and 1990 we had two litters with our two Ridgebacks, from which we kept two of the puppies from the first litter. The puppies grew up to be two wonderful bitches, but one of them had a small  Ridge-fault and the other suffered from a serious infection as a young dog, and thus none of them was suited for further breeding. Over the years I’ve even had other breeds, mainly because I wanted to work with sheepdogs to help with our sheep, and that is something a Ridgeback is not suitable for.

In 2008 I began my search for a new Rhodesian Ridgeback bitch with parents that were beautiful, healthy and with an excellent temperament. In my search, I was lucky enough to find Kennel Linnemann. It was here I fell in love with ‘little miss yellow’ or Bikita, as she would later be known as, when she was just 3 weeks old. Even though she wasn’t exactly the prettiest in the litter at the time, I just knew that she was  the one. I was so happy, when I was contacted by Lykke Linnet and was informed that Bikita – after the litter had been puppy-tested, when they were 7 weeks old – was mine, as I had wanted so much. 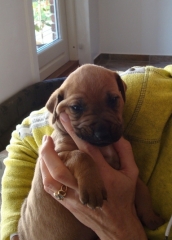 Bikita has always been a very special dog, even when she was quite little. She is highly intelligent, very independent, has a great self confidence, and a well developed hunting instinct, so if she has got the scent, nothing can stop her, – but at the same time she is a princess, who loves to cuddle in the couch or in my bed.

We have had great fun taking obedience-classes with other Ridgebacks and doing field-tracking, and Bikita has also been to a number of shows with excellent results.

If you are interested to know more about Bikita, you are welcome to contact us. Send an e-mail to bikitas@bikitas.dk or phone us at telephone-number + 45 21 22 43 47. 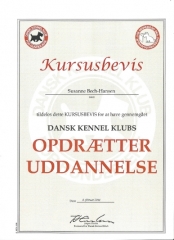 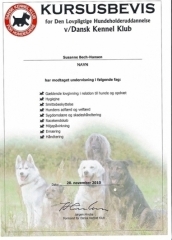